What It Takes To Make Your Kids Millionaires 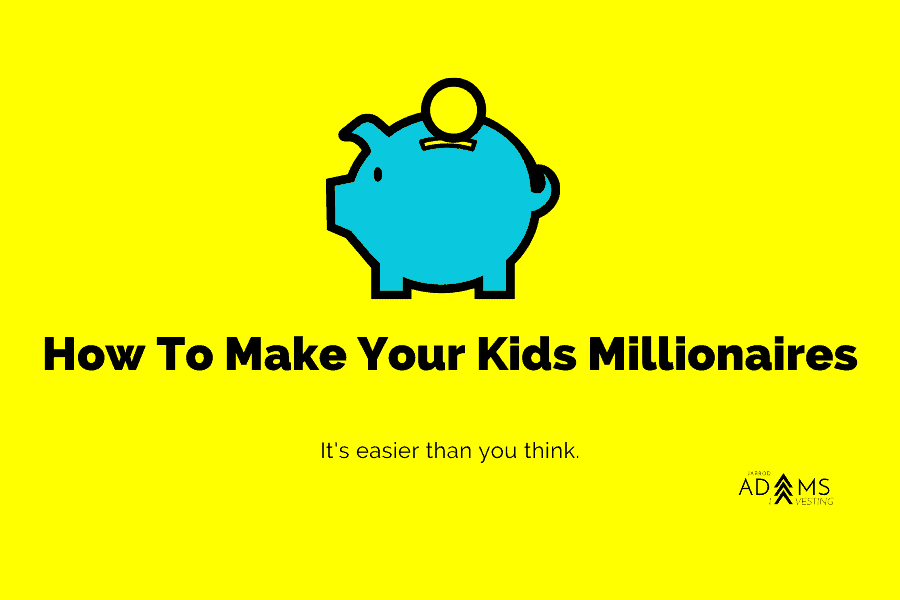 In the Compounding & Coffee post I talked about becoming a millionaire on minimum wage. It got me thinking about what it would take to make my kids millionaires at their retirement.

As a parent, I always want to give them more than I have. Imagine the feeling of not having to save as much for retirement. I envision their lives being a little more care-free, a little more adventurous and a little less burdened.

To get started I would want to put the money in their name (in a custodial account) to avoid gift tax now because it will be too big in the future (which is a great problem to have). The IRS allows an annual gift exclusion amount of $15,000 per person in 2021 and you can give it to as many individuals as you’d like with no federal gift tax consequences. Additionally, a husband and wife can each make $15,000 gifts, doubling the impact.

I love being a parent of twin 9 year old girls. They have brought so much joy and laughter to our home. They look exactly alike but have very different personalities.

Olivia is a planner, a leader and a saver. She enjoys earning money, budgeting her spending (at a 9 year old level) and has even added lemonade stand money to her investment account.

Isabel is more of a free spirit and lives in the moment. She has an unmatched level of joy that I admire. While she enjoys investing money, she enjoys spending it just as much.

Let’s run simultaneous scenarios to see what it looks like if I gift them both the max but manage the accounts differently.

Goal:     invested until age 65. At that age, she can begin drawing income annually using the 4% rule.

The 4% Rule is a widely accepted rule of thumb for spending in retirement. If you withdraw 4% of your account annually, you will likely not outlive your money and may even have funds leftover to pass on to your heirs.

Goal:     invest it for retirement with two options for withdrawal at age 25 and 30. Withdrawal amount is $10,000 each time. At age 65, begin drawing income annually using the 4% rule.

Assume a 9% annual return for both accounts.

For long-term investors such as the twins, compounding is the secret weapon. It is the ability to reinvest earnings so that those earnings can generate their own earnings. Basically, producing earnings from previous earnings, which often times include dividends. Dividends are paid regularly (usually quarterly) by a company to its shareholders. Dividends can be taken in cash or reinvested into your investment account. For maximum compounding effect, reinvest your dividends.

A Closer Look At Compounding:

At retirement, the twins will be millionaires! That is astonishing to me. With one gift of 15k and a lot of time and discipline, they will have a retirement income. Inflation will be a factor as 1.8M today will not have the same value as 1.8M 56 years in the future, but it is certainly an impressive head start.

It is worth noting the impact of the two $10,000 withdrawals that Isabel took. While she probably used that money as a down payment on a home, to pay off debt or any other sensible use, it impacted her account in a big way. Not only does she have 500k less than Olivia at age 65 but her annual income is 20k less than Olivia’s each year.

Remember, even at retirement, the accounts are still invested and earning an average return of 9% per year (which could be decreased to a more conservative profile at this age) while the girls are taking a 4% withdrawal. This is how the 4% rule continues to work and how they will hopefully never outlive their money and may even pass some on to their heirs.

The point of the story is time and discipline. Compounding needs time to work its magic. If you want to make your kids wealthy, start early. The longer the money remains invested, the greater the power of the compounding effect. We see this play out with Isabel’s withdrawals hindering her account from reaching its full potential. I hope that by preparing our kids to stick with the plan, they will avoid withdrawals and trying to time the markets and therefore realize the full potential of the account.

Want to find out if wealth management is right for you? You’ll never know unless you ask. Click on your favorite messaging platform and ask Jarrod.